The year was 1955, the month October, when two African Americans Messrs Robert Freeman Jnr., an actuary, and Vertner Tandy, a lawyer, arrived in Ghana, then known as the Gold Coast, to set up Life Assurance Company. Before their arrival, their two Ghanaian counterparts, Messrs Henry Plange Nyemitei and Samuel Cofie Johnson then working with the Gresham Insurance Company had been doing the preparatory work for the project.

In November 1955, the GOLD COAST INSURANCE COMPANY was registered with a stated bank deposit of £5,000 and on 1st March, 1956, the company started operations in a building now known as Koala Shopping Center, at Osu, Accra with the following Management personnel: 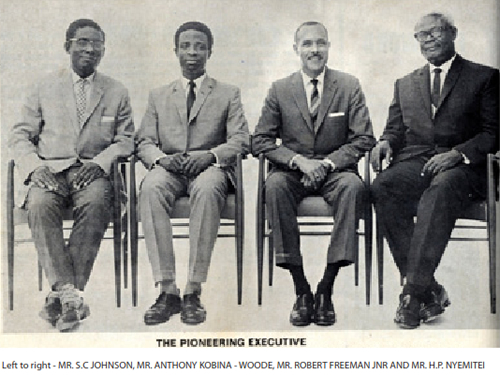 After Ghana gained independence in 1957, the Company's name was changed to "Ghana Insurance Company."

In 1962, the Government decided to set up National Insurance Company and this led to it buying over the GHANA INSURANCE COMPANY and its subsidiary - GHANA GENERAL.

In February of that same year, the Government had passed an Act which took over the Ghana Cooperative Insurance Society Limited (Co-op for short), the only Insurance Company at the time in which the Government had financial interest, and reconstituted it into the State Insurance Corporation pending completion of negotiations with the two private companies with Mr. Robert Freeman becoming the first substantive Managing Director.

By a special resolution passed on 22nd October, 2007 the name of the Company was changed to SIC Insurance Company Limited, and in December,2007, SIC floated its shares to the general public and the IPO was oversubscribed by 97%.

The company went public in January 2008, when the Government of Ghana offered 60% of its shares to the general public. In December 31, 2008, the company listed SIC Financial services Ltd as its Subsidiary.

As at December 2009, the companys assets totalled GHc185.374 with a gross premium of GHC 56.877m. Management of the company is on a project to expand its operations across the West African sub - region targeting Sierra Leone and Liberia.